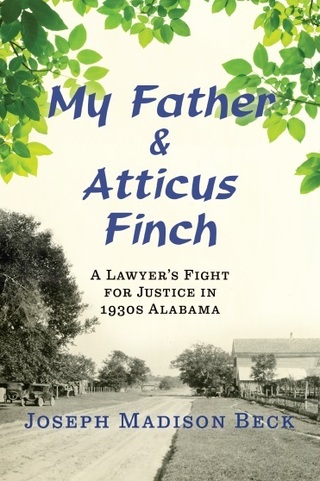 “My father, Martin L. King, Jr., lauded To Kill A Mockingbird as a ‘popular and widely respected novel’ that reflects the ‘American ethos that responds to the strength of moral force.’ I am confident that my father would find this remarkable account of Foster Beck compelling, as it epitomizes “the strength of moral force.” In our current era of continuing racial injustice, this memoir is both timely and inspirational.”
—Martin Luther King III

“As a lawyer himself, author Beck lays out the circumstances of the case with gripping, almost cinematic detail mustered from court documents, newspaper articles, family papers, and conversations.” – Booklist

“Beck’s claim that the highly publicized White trial may have influenced the young Harper Lee is as fascinating as it is plausible, especially given the striking similarities he notes between his father and Atticus Finch. Yet it is ultimately the generosity of spirit that infuses Beck’s recollections that is the most moving part of this memorable story.” – Kirkus Review

“In this fast-moving memoir, Beck recounts how his father, a small-town lawyer, was thrown into the 1938 trial of a Northern black man accused of raping a local white woman in a southern Alabama town…The parallels to Mockingbird resound throughout the recounting of the scandalous case…Inspiration for Mockingbird or no, the memoir stands on its own as a powerful telling of injustice in a less tolerant time.”— Minneapolis Star Tribune

“His son has delved into court records to narrate the trial, but also beautifully describes the region’s community rituals—hunting doves, killing hogs, making cane syrup. More importantly, he lovingly portrays his parents and grandparents in all their complexities. Foster Beck and his wife-to-be Bertha Stewart were honorable people who were punished for fighting injustice, and this book is a fine tribute.” — BookPage

"A real-life Atticus Finch puts his career on the line to fight racism in the 1930s....While this case may or may not have subconsciously influenced Harper Lee, Foster Beck's story is one worth knowing and full of lessons valuable three quarters of a century later.”
— ShelfAwareness

“An insightful window into the everyday life of small-town Alabama in the 1930s… A sad but gripping account.”—Library Journal

“While this case may or may not have subconsciously influenced Harper Lee, Foster Beck's story is one worth knowing and full of lessons valuable three quarters of a century later…A real-life Atticus Finch puts his career on the line to fight racism in the 1930s.”—Shelf Awareness

“[My Father and Atticus Finch] graciously reconstructs an egregious miscarriage of justice in a bygone era. The courtroom drama unfolds in language that’s immediate and cinematic.” —Atlanta Magazine

“Race relations, class, and justice are all prominent issues in this captivating memoir.”
—Bustle

“Joseph Madison Beck's enthralling memoir on humanity, justice, and the world we live in… is one full of emotion and suspense in equal measure.”—Creative Loafing

"Beck does a nice job of including history of the South in the time he grew up, including this passage: "Southerners were like an ethnic group back when I was growing up, with our own version of history, our particular grievances, our preferred preparations of foods, our unique accents. Like other American ethnic groups, we had our rituals, especially in small towns and rural areas. At least as late as the late 1940s and early 1950s, there was, in parts of the South, an annual rite called Confederate Grave Decoration Day. " — Brooklyn Digest

My Father & Atticus Finch – A Lawyer's Fight For Justice In 1930s Alabama
The story of Foster Beck, the author's late father, whose defense of a black man accused of rape in 1930s Alabama foreshadowed the trial at the heart of To Kill A Mockingbird